To my knowledge, indie developers don’t publish the kind of numbers that you’ll find in this post. My sales records are none of your business, as the saying quite literally goes. The question in your mind will no doubt be why am I writing this at all? It’s a fair question. Before I answer it, allow me to first dismiss all the unsavory reasons some readers might unfairly concoct. This is not a public whine session. I am neither a victim nor a failure. As these things go, I have been very fortunate with Unread. I have nothing but gratitude for everyone who supported me with their blog posts, tweets, pats on the back, and — above all — with their hard-earned cash.

My intention is to share the dirty details of Unread’s story with my colleagues. I especially hope that this post is useful to anyone who is considering striking out on her own, as I did last summer. Unread will no doubt be a cautionary tale for some. For others, it might be an inspiration to one-up what has been my personal best effort, proving what opportunity may still lie in the indie app market.

At the very least, I think you’ll come to agree with these takeaways:

I began work on Unread at the beginning of July 2013. I spent about six weeks on the overall design of the app, then plunged headfirst into Xcode, not coming up again for air until the following spring. I estimate that I worked sixty to eighty hours a week every week from July 2013 up until the launch of Unread for iPhone Version 1.0 in February 2014. Along the way were many challenges: building custom user interface navigation and controls, a vast sharing library, syncing and persistence architectures, performance tuning, etc.

Here’s what the Github punchcard looks like for Unread’s main repository: 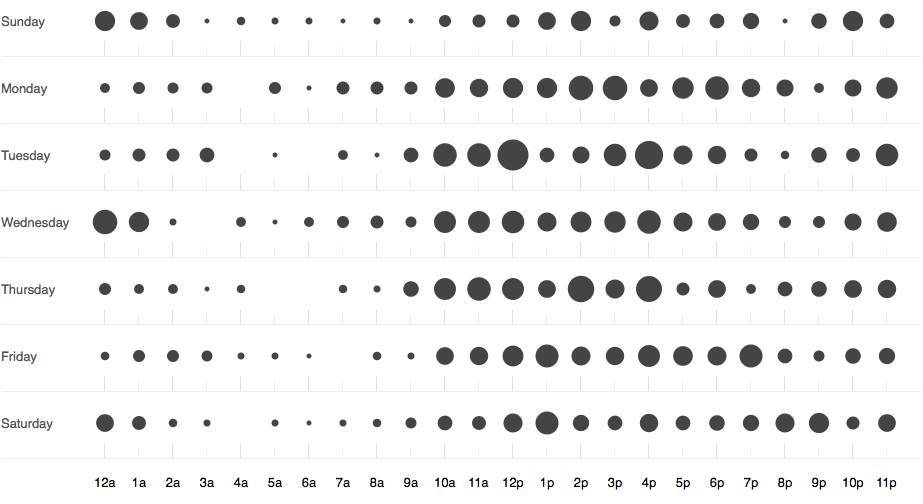 My marriage and mental health suffered a lot because of that punchcard. I worked on Unread seven days a week, at almost any hour of the day. I think the quality and polish of Version 1.0 is due to all that extra effort, but it was physically and emotionally taxing. It’s not a sustainable way to live, and I don’t recommend it. However, if I had adhered to a saner work-week, Unread would have taken a year to finish and might not have launched at all.

Thanks to the generous support of many independent writers — Federico Viticci, Shawn Blanc, Stephen Hackett, and others — Unread had a great launch week. If you use RSS or Twitter to read about what’s new in the iOS world, chances are good that you saw it mentioned once or twice.

After a huge spike in sales the first day, sales dropped in what is (to my knowledge) a typical launch week curve for iPhone apps. The week after launch, Unread was featured on the main page of the App Store. This feature did not lead to a spike in sales. Rather, it kept sales from dropping any further for that week, then tapered off. I conclude from this that an App Store feature may not be as helpful as positive, prominent reviews from influential writers.

Here is a graph of cumulative iPhone sales, from launch to the present. The orange dotted line is the averaged trend line:

Here are the highlights from this graph. Note that these numbers are after Apple’s 30 percent cut and before I’ve set aside a portion for self-employment taxes and healthcare premiums:

Half of the lifetime sales of Unread were generated in the first five days1. It would take another 170 days (24 weeks) to generate that same amount again.

Unread’s biggest mid-run spike accompanied the launch of Version 1.2 for iPhone. This was a huge update with lots of new features: two new RSS services, an image viewer, a quick way to jump between articles, etc. Version 1.2 was released on April 21st, nine weeks after the previous update.

It’s difficult to assess how much money Version 1.2 earned by itself. A close approximation might be to determine the cumulative sales between the launch of Version 1.2 and when the sales trend line returned to the previous average trend. By my estimates, this happened around May 4th, about two weeks later. That would mean Version 1.2 earned about $4,000 extra in sales, plus or minus $1K.

Since it took two months to develop, Version 1.2 earned me around $2,000/month in sales. Subtracting 40 percent for self-employment taxes2 and a $350 health care premium3, my take-home pay for that work was about $850/month.

In the interest of brevity I won’t go into detail about Unread for iPad. Here is the cumulative sales graph to date:

Suffice it to say, so far it looks like a scaled-down version of the Unread sales history:

Unread for iPhone has earned a total of $32K in App Store sales. Unread for iPad has earned $10K. After subtracting 40 percent in self-employment taxes and $350/month for health care premiums (times 12 months), the actual take-home pay from the combined sales of both apps is:

Considering the enormous amount of effort I have put into these apps over the past year, that’s a depressing figure. I try not to think about the salary I could earn if I worked for another company, with my skills and qualifications. It’s also a solid piece of evidence that shows that paid-up-front app sales are not a sustainable way to make money on the App Store.

There are lots of things that I haven’t tried with Unread. I haven’t done any major promotions except $400 worth of promoted tweets on Twitter, coinciding with the launch of Version 1.2.4 I haven’t added any in-app purchases or subscriptions, either. But Unread is a good test case nonetheless, for the following reasons:

Despite all of these circumstances, Unread still only earned $42K in sales ($21K after taxes and expenses) and is on a course that doesn’t promise much growth. I conclude from all this that anyone who wants to make a satisfying living as an independent app developer should seriously consider only building apps based on sustainable revenue models. I suspect this means through consumable in-app purchases, like those in Candy Crush Saga or Clash of Clans, or through recurring subscription charges, like those in WhatsApp. Furthermore, I have grave doubts that any solo developer would have the capacity to ship and maintain either kind of business working alone. She would probably have to consolidate her business with other indie developers in the same position. The marketing budgets of the major competitors makes me doubt that even a consolidation strategy is tenable.