In an episode of the third season of Black Mirror, a woman pulls up to an electric gas station of the near future. It’s the wee hours of the night. Her electric car, a rental, has a low battery. It’s about to putter out. She goes to the — I’m not sure what to call it — pump and tries to plug in the charging cable. It won’t fit. She rummages through the trunk and can’t find a conversion cable. She begs the attendant, and then everyone else at the station, but no one has the cable. She’s stranded. She has no choice but to trek down the interstate on foot, hoping to hitch a hike. 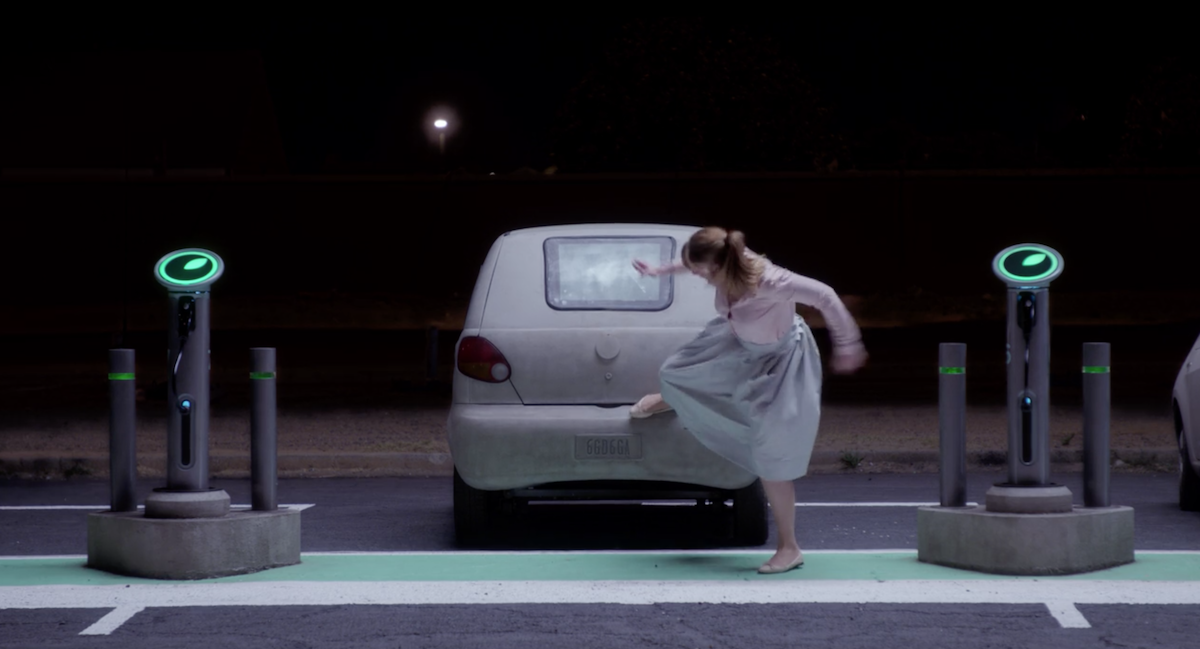 That scene strikes me as precisely the bold future that we’re rocketing towards.

Only one percent of Android users have access to the latest version of Android because carriers and manufacturers aren’t motivated to release them.

The next lightbulb you buy might be conscripted into an army of lightbulbs bent on bringing down the power grid on the eastern seaboard if its manufacturer isn’t obligated to use strong enough security measures. The few manufacturers that are using those standards might be too expensive for you or just won’t work with your other Things of the Internet.

The new “TV” app for tvOS/iOS doesn’t include Netflix, arguably the most important streaming service, presumably because Netflix refused whatever terms Apple required.

There is no Amazon Prime Video app at all on tvOS, let alone in the new TV app. Comixology, another Amazon product, doesn’t sell comics in-app because the 30% markup on in-app purchases makes the idea a non-starter for Amazon. They can’t even link to the online store. You just have to know that there’s an online store where you can purchase the items, and that those items will magically appear in the app.

Google Maps, demonstrably the best mapping service in the world, can’t be configured as the default mapping app on your iPhone or iPad. Because of the ongoing competition between Apple and Google, it’s not even installed by default anymore1. Many iPhone owners will never discover just how much better Google Maps is.

Google’s speech-to-text recognition is fantastically good. Try it out in the Google iOS app sometime, and compare the same prompts with what you get from Siri. I’m talking about the difference between a barber jacket and a Barbour jacket. Google understands when you mean the latter. The default iOS keyboard has a voice recognition feature that isn’t nearly as good, but you can’t use Google’s speech recognition in Gboard, Google’s iOS keyboard, because Apple won’t allow them to access the microphone.

Five years and five operating systems later, Apple finally extended a public API for Siri, but it only works with six limited domains. You still can’t use Siri to put an item in the todo list app of your choice.

If you prefer Chrome over Safari on iOS, or the Gmail iOS app over Mail, you have to plod through the tedious procedure of launching those apps manually since system-wide features can only use the native apps.

Hilariously, you can spend $4299 dollars on a spanking new MacBook Pro and $969 dollars on an iPhone 7 Plus — both from the same manufacturer — but you cannot connect them together without a $25 conversion cable.

It is no wonder, then, that Google is staking their future on original hardware. There’s no way they can embed all of their fantastic services into a competitor’s device at a level that’s integrated deeply enough to be useful. The only way they can bring their AI assistant plans into concrete reality is to make their own phone. From a historical perspective, this is a pathetic waste of resources. Apple already makes the best hardware and software. The ideal smartphone would marry Apple’s hardware and software with Google’s services. But because of the intractable realities of competition and viable business models, Google has to reinvent Apple’s wheels in order to keep selling their own.

This is not a rant about the lack of open standards. Open standards don’t lead to a perfect user experience, either. The podcasting industry is, by tech standards, the wild west. But if you try sharing an episode with someone, they’ll be unable to hear it unless you share it using a podcast client that offers a proprietary browser player. New features in HTML and CSS are dependent upon mass market browser developers like Apple, Google, and Microsoft agreeing to implement spec changes. Their willingness to do so is a business decision, and could change in the future — <cough>AMP</cough>.

Please understand I am not suggesting that things could be any different. At least not practically. There are fixed points in business, law, and history that are determining our status quo. What I am saying is that our technological future is being shaped more by business constraints than engineering constraints. What is technically possible is outstripping what is feasible in the market.

The future is looking less and less like Star Trek and more like that woman in Black Mirror, thumb in the wind, begging for a ride.