Back when I was a registered nurse I had an opportunity to volunteer at a field hospital in Port-au-Prince, Haiti. It was a year after the terrible earthquake in 2010, which killed hundreds of thousands of people and left hundreds of thousands more homeless. Survivors were still living in conditions more appalling then you can imagine — fields covered with tents as far as my eyes could see, strung up between rivers of mud and filth.

The hospital I volunteered at was operating out of a couple of massive tents, like you might see at a state fair in the US. Despite their humble infrastructure, Project Medishare was running a full-service general hospital, providing care for all kinds of patients and conditions. They even had a small ICU, which is where I was assigned.1 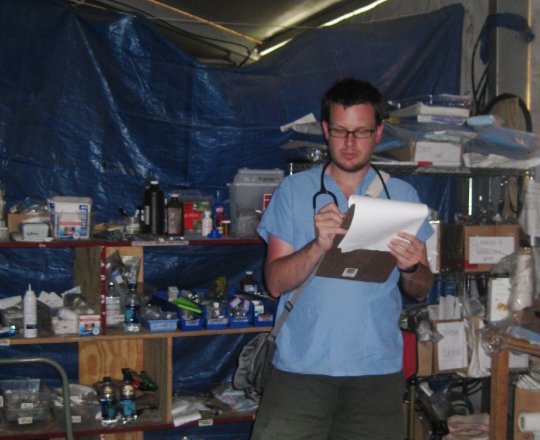 One of the volunteers at the hospital was a Haitian young man named Samuel who had been a medical student at a local university. The earthquake had destroyed his school. The closest he could get to his dream of becoming a doctor was to volunteer at Project Medishare. Samuel and I spent a lot of time together and became fast friends.

One night while our patients were sleeping, Samuel and I were chatting about life in the States versus Haiti. In the course of conversation I thoughtlessly mentioned something about my iPad back home. Samuel got quiet, cocked his head at me.

This was 2011. The iPad was still a novelty in the US, let alone in Haiti. I was an iOS nerd who had to have the latest gadget, and as a nurse I had the means to afford it. If memory serves I earned $2200 a month after income taxes. An iPad wasn’t cheap, but I had enough wiggle room in my budget to buy one. By American standards, an iPad was an expensive toy. But in Haiti, $500 USD was an outrageous sum.

I don’t remember how I answered Samuel’s question. I was dumbstruck. Was I rich? Of course not, right? I punched a time clock at work. I drove a Hyundai with only the basic features. My one-bedroom apartment had sparse thrift store furniture. I paid only the monthly minimums on mountains of college debt.

After a week of working in swaying tents and sleeping under mosquito nets and shitting in a hole in the earth, coming home to my one bedroom apartment, where I lived alone with floor-to-ceiling windows and walls that didn’t buckle in the wind, was overwhelming. Everything was sickeningly nice, nauseatingly pleasant. Even my thrift store furniture seemed opulent by comparison.

In the quiet moment after Samuel’s question, I realized more acutely than ever that the truth about my privileged circumstances isn’t in my perception of myself, but in how others perceive me. Relatively, from my friend Samuel’s perspective, I was rich. However much it contradicted my own ideas about myself, Samuel’s perception was the only perception that mattered.

Please consider donating or volunteering with Project Medishare. They do a lot of good for a lot of hurting people.