This week’s design review is of the eHarmony iPhone app, by the online dating service of the same name. From eHarmony’s description of itself:

Santa Monica-based eHarmony launched in the United States in 2000 and is now the #1 Trusted Relationship Services Provider in the USA. eHarmony’s patented Compatibility Matching System® allows eHarmony members to be matched with compatible persons with whom they are likely to enjoy a long-term relationship.

eHarmony faces fresh competition from companies like OK Cupid and Tinder. Tinder’s app in particular is much more casual and fun than the eHarmony app. But that doesn’t mean that Tinder’s dating recommendations are better. The typical eHarmony customer is looking for a potentially serious, long-term relationship. eHarmony has to figure out how to appeal to a younger crowd without undermining the personality questionnaire that is both a chore and the secret ingredient to eHarmony’s superior recommendations.

Chris Truman, an iOS engineer at eHarmony, bravely submitted their app for a Friday App Design Review. I like his attitude:

I think a high profile app like eHarmony would be a great example of how older companies can still have a clean and focused mobile product.

The eHarmony iPhone app is huge. It feels like three or four apps crammed into one. It was hard for me to decide where I should focus this review. If there’s a theme to my critique, it’s ruthlessly eliminate confusion. I have three general recommendations:

For those unfamiliar with the eHarmony app, what follows is a brief description of the way it works.

Upon first launch the user is guided through a lengthy questionnaire. There are dozens of questions, presented one at a time in a full-screen view: 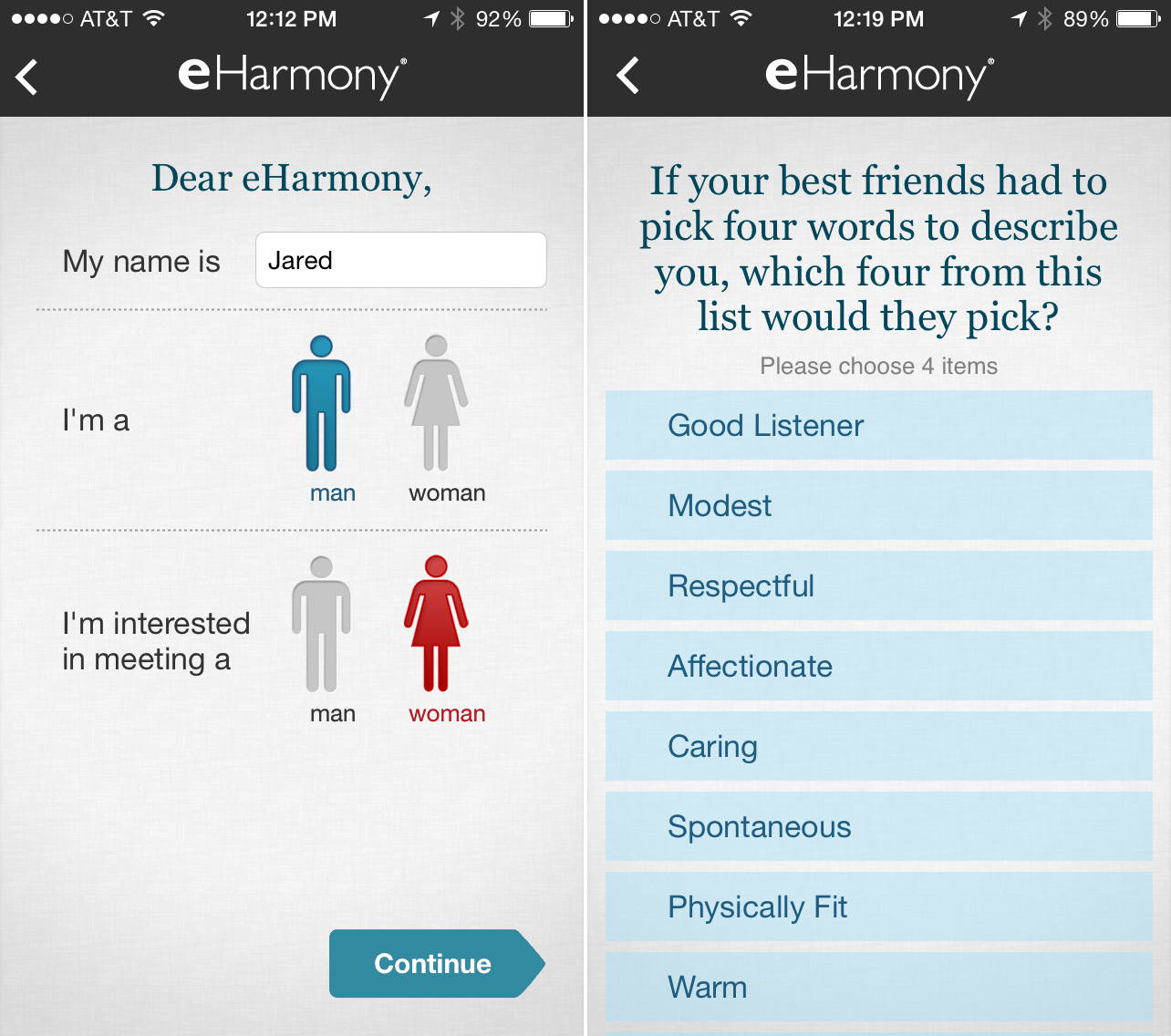 Two of many question screens.

Questions are interspersed with section dividers that help break up the monotony of the questions and encourage the user to keep going: 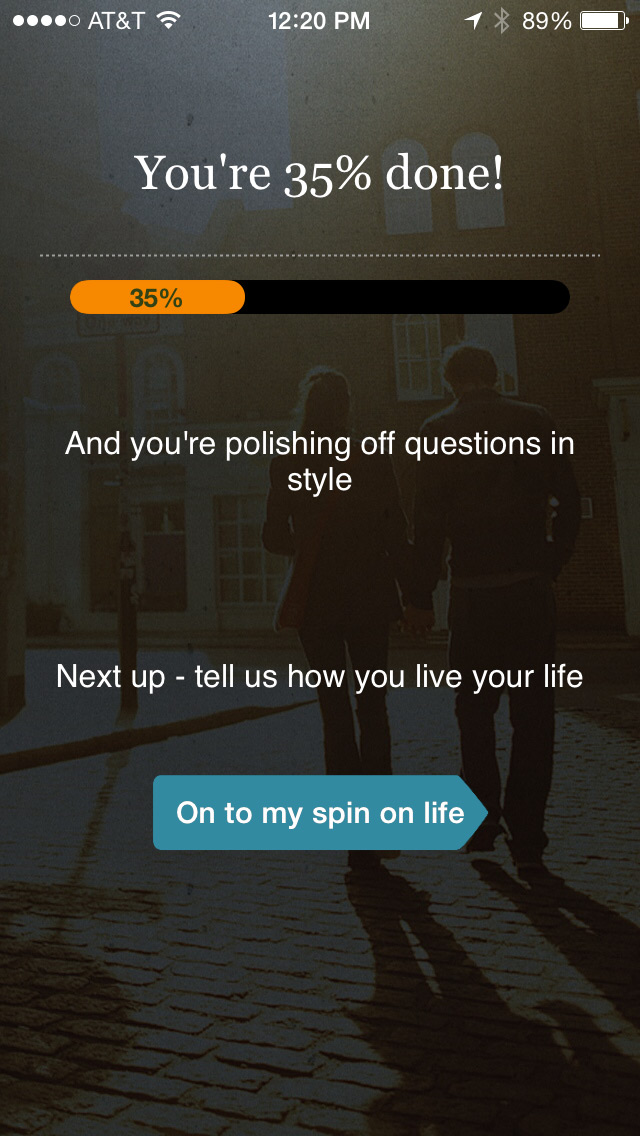 The questionnaire is the mission-critical component of eHarmony’s recommendation engine. The more honestly and thoroughly a user answers these questions, the more compatible her suggested matches will be.

Imagine how difficult a design challenge this must be. In order for your customers to have a happy experience, you must first compel them to take a tedious and potentially embarrassing test. Their long-term satisfaction with your service depends upon the quality of their answers, so there’s a limit to how much sugar you can pile on that pill.

After the completion of the questionnaire, the user is shown what is the eHarmony app proper:

The app proper, with basement menu.

There are many screens in the app – My Profile, Activity, Matches, etc. – all accessible from a super-imposed basement menu that can only be invoked by tapping the hamburger button in the top left corner.

Unfortunately, I’m going to have to get a little harsh. In all of the screens of the app, there is simply too much visual activity. There are decorative views and calls-to-action all over the place. The basement menu alone has a banner, a button, a badge, a ribbon, and a progress indicator (see above).

All of these elements might be important, but they can’t be equally important. Some of them must be sacrificed for the sake of the greater good. Strip away at least half of the supplementary elements. It might be painful for the designer, but it will make the app easier for first-time users.

The visual language needs to be consolidated. The current aesthetic is what I call Tower of Babel Design. The app is equal parts flat colors, linen textures, and granite backgrounds. Notice the disorienting mix of iOS 7 and iOS 6 styles in the basement menu screenshot above. An app can’t have two masters. It’s gotta serve somebody, Ive or Forstall.

I think the blurred background of the basement menu is not helpful for either aesthetic. It unnecessarily increases the density of visual information in an area of the app that already has a dense population. I’d love to know what the rationale was for using it. As an unforgiving outsider, it looks like someone was groping for a shortcut to an iOS 7 redesign.

Pick a few constraints – a color palette, a font, a texture or a lack thereof – and enforce them ruthlessly. This has the added benefit of speeding up future design and development iterations. It’s hard to overstate how helpful constraints can be.

Aside from making the app more visually appealing, reducing visual clutter communicates an important message to the user: we care. A spotless, well-stocked bathroom makes you trust your favorite restaurant. In the same way, a tidy aesthetic creates confidence in an app’s capabilities.

When I finished the questionnaire, I felt like I emerged from a long tunnel only to be abandoned in the middle of a vast, complicated app. I was still a newcomer without any idea of where I should go next.

Take a cue from video games. Well-designed contemporary games weave tutorial content seamlessly into the progression of the story. Take a look at Portal 2 for an excellent example. 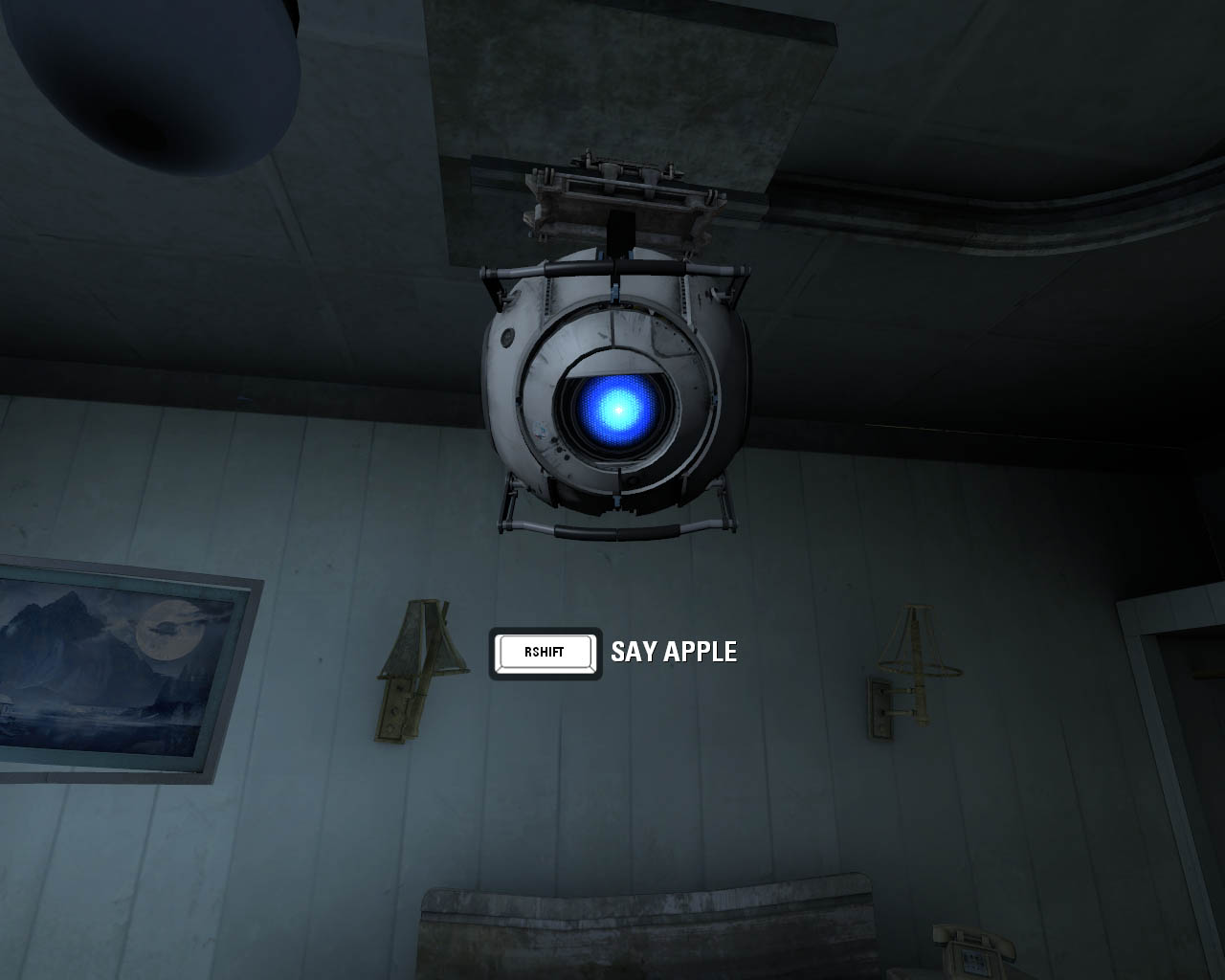 Here’s a transcript of my favorite part (paraphrased):

Your character has been in suspended animation for very long time.

Let’s make sure you don’t have any brain damage. Now say “Apple.”

Okay, what you’re doing is jumping. You just jumped. Let’s just move on.

That scene elevates what would have been an otherwise frustrating moment of accidental discovery into a hilarious guided tour. The game progresses in a similar fashion, using ambient voice overs and character interactions to subtly teach the gamer basic skills. The next objective is always clear, and the gamer learns new skills without feeling lost or bored.

In eHarmony, when the questionnaire is over, the user lands on the Activity screen with the basement menu waiting in the wings. There are many competing calls-to-action without an obvious order or hierarchy. A better approach would continue to guide the user through the various features of the app. Limit the calls-to-action to just one at a time. Start with the easy stuff, and then get more complex.

One has to be careful when implementing in-app tutorials. It’s easy to over do it. For an example of what not to do, look at this mess that Apple shipped with iPhoto for iPad: 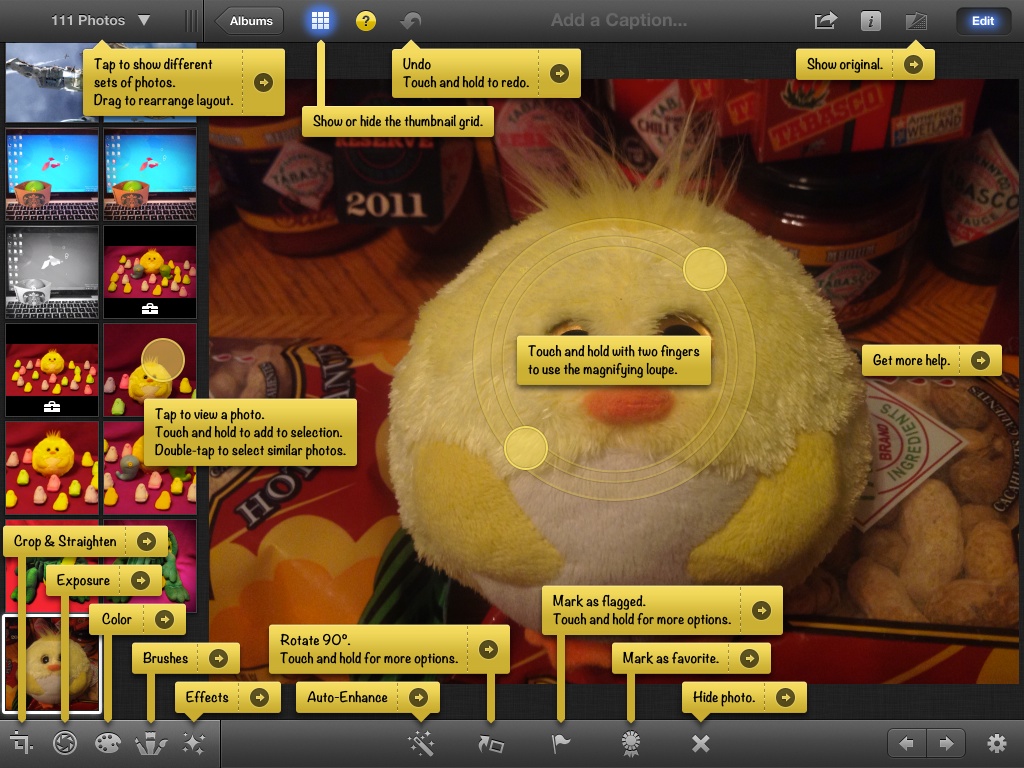 One of the reasons that iPhoto’s tutorial sucks is that the app launches with every available feature fully unlocked and exposed. It’s too much for the user to take in all at once. If only one or two key features were available at first, those seventeen(!) popovers could be reduced to a handful.

eHarmony has a similar amount of feature complexity. There are ten screens to choose from in the basement menu, and each screen has its own subcategories and sections. It’s difficult to figure out which, if any, is the main screen of the app.

Again, a solution could be to take a cue from video game design. Character abilities are rarely available all at once. They are unlocked as the gamer progresses through an in-game tutorial. New abilities are announced with little moments of fanfare, creating a sense of accomplishment and expertise.

eHarmony could stagger the unveiling of “new” features across multiple launches, perhaps even multiple days. Begin with only one or two essential features, like the Matches screen and the user’s profile. Guide the user through a combination of fun prompts and limited functionality. Even if the user ignores the prompts, she’ll have fewer corners to get lost in. First time users don’t need to see screens like Datebook or eH Advice.

Choose a layout that lends itself to this kind of staggered approach. A basement menu is just one possibility among others. However the app is laid out, bear in mind that newly-unlocked features might not be discoverable if they’re buried in an offscreen menu.

It should go without saying that a typical eHarmony user is looking for companionship. Whether he or she wants a serious or lighthearted relationship, eHarmony’s private messaging feature is the shortest path for the user to feel less alone when interacting with the app. This feature is difficult to find in the current version of the app.

I’ve had a test account1 for the last two weeks. A few days after I set it up, I received a private message from another (anonymous) user. I learned about this interaction via an automated email. But when I launched the eHarmony iPhone app to respond to the message, it took me several tries to find it. I finally found it buried at the bottom of a long list of generic Activity updates (so-and-so updated her profile, etc.). 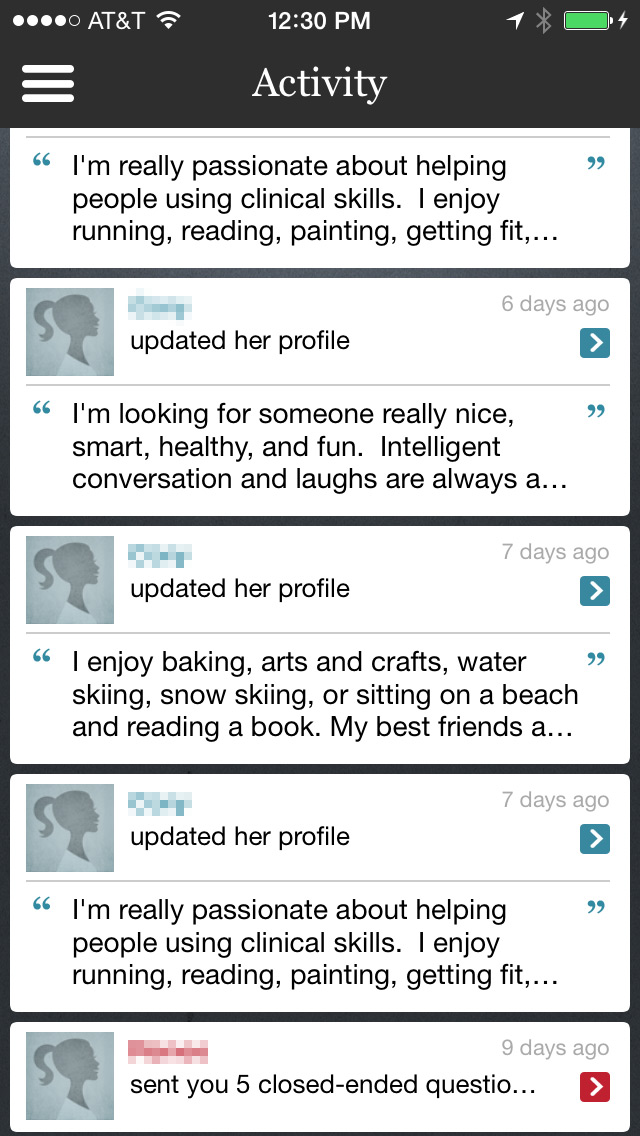 Activity screen, way at the bottom.

Tapping the message summary at the bottom takes me to this screen: 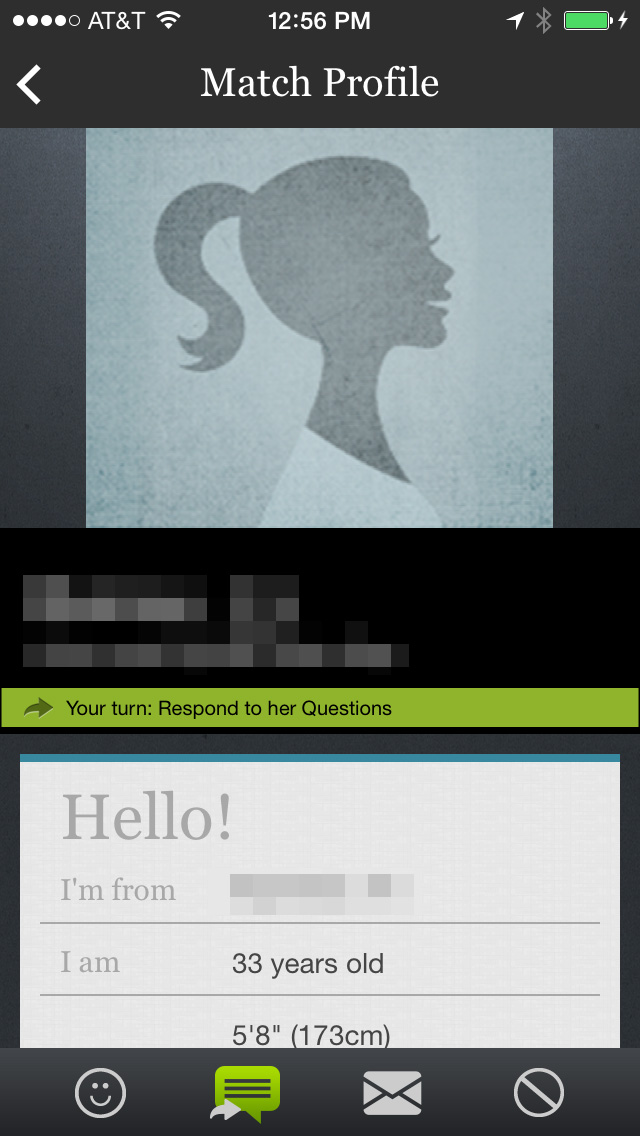 Can you spot where I’m supposed to tap to respond to her questions? I can tap either the tiny green bar that looks like a section header, or the green chat bubble in the toolbar.

The iconography in that toolbar needs work. Why are there two messaging icons? Is one public and one private? Why is the chat bubble green? Tapping the chat bubble shows another screen. The green highlight is a misuse of the visual language of a UITabBar. It has a selected appearance when it isn’t actually selectable. It’s a button. For several minutes I assumed that I was already viewing that tab, until I tried tapping one of the other items, triggering an unexpected push transition.

But let’s not get lost in the weeds of these minor quibbles. I have a more dramatic suggestion. I think the entire concept of this screen ought to be thrown out and replaced with something more intimate and familiar.

SMS Butterflies in my Stomach

I would style this screen to look like a generic SMS conversation. Visual associations are powerful. We can all remember the thrill of getting a text from a new crush. Build an interface that brings back memories of being a teenager with butterflies in one’s stomach. For some of us, those memories might be fairly recent.

I would consider going even further down this road. Perhaps the basement menu and all its screens should be tossed away. Reduce the app to two sections: private conversations, and a place for finding new matches. There’s no need for a custom calendar or an advice column. Make it easy for people to find a match, and their desire for conversation and companionship should take care of the rest.

No word is oftener on the lips of men than Friendship, and indeed no thought is more familiar to their aspirations. All men are dreaming of it, and its drama, which is always a tragedy, is enacted daily. It is the secret of the universe. You may thread the town, you may wander the country, and none shall ever speak of it, yet thought is everywhere busy about it, and the idea of what is possible in this respect affects our behavior toward all new men and women, and a great many old ones.