Since I received one last week, I’ve been jotting and sketching with a Pencil stylus from Fifty Three, makers of the Paper drawing app for iPad. Paper, which was already my favorite iOS app, promised to be even better when paired with the Pencil stylus. That promise is mostly fulfilled. 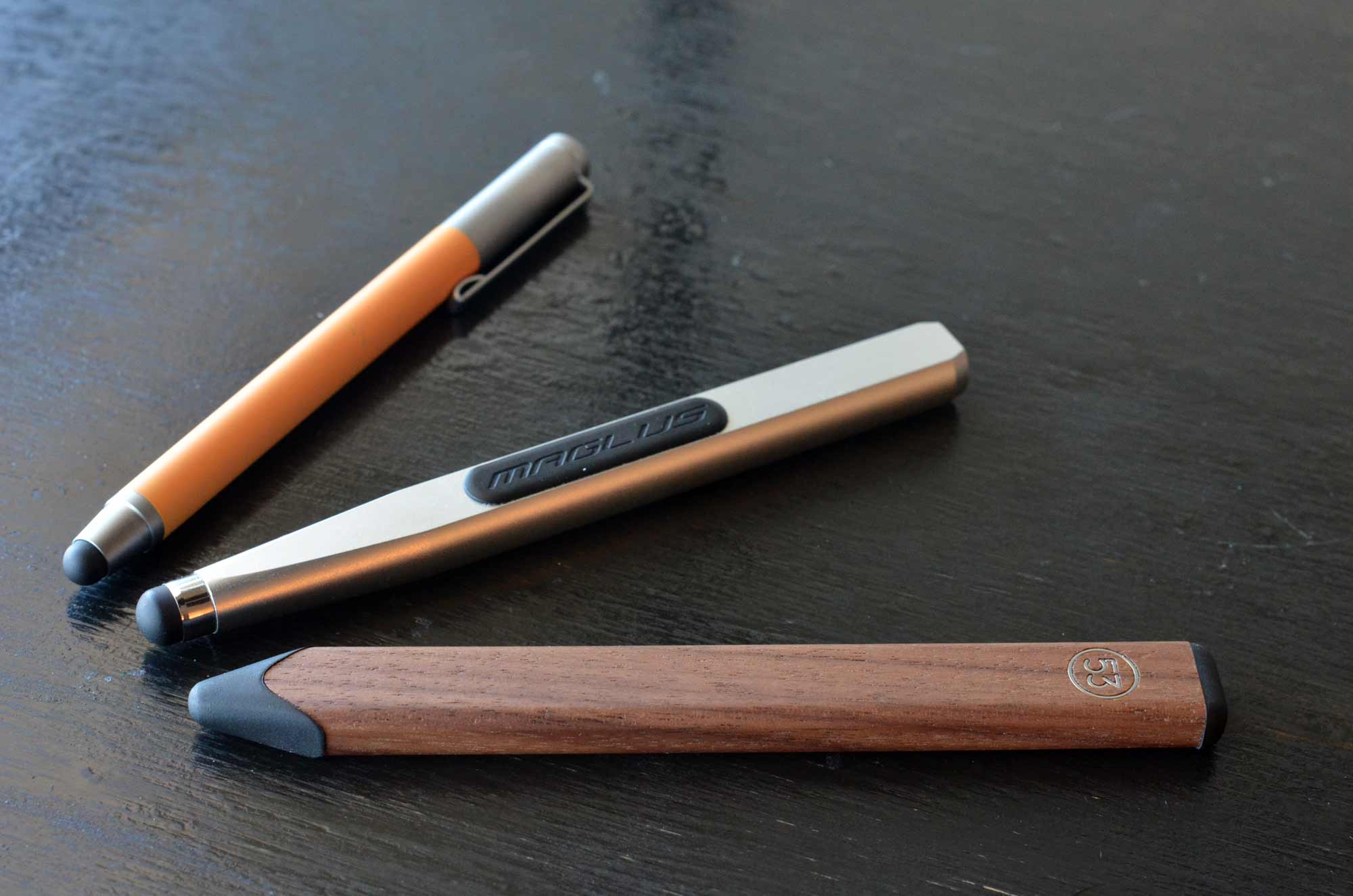 My Pencil arrived packaged in a cute cardboard tube that opens from the top like a tiny diploma canister. Pencil communicates wirelessly with the Paper app via Bluetooth, so there is an internal battery that requires charging. A warning label on a protective wrapper around the stylus reminded me about the battery. Fortunately, my stylus was already fully charged.

Pairing the stylus was easy. A short video showed me how to do it. You press the tip of the stylus against a spot on the left edge of the tool tray. It pairs after pressing and holding that spot for a few seconds — faster than I was expecting, but not as fast as I would like. It is disappointing that the stylus must be re-paired after an extended period without using it. In practice, I have found that I need to pair the stylus every time I pick up my iPad. Your experience may differ, since I probably use my iPad less than most folks.

You don’t need to pair Pencil to use it as a stylus. Pairing is only necessary to unlock the features specific to the Paper app. You can see these features here. All of them work as advertised, almost without caveat. Even the palm rest detection was perfect. The eraser was the only new feature to give me trouble. The eraser tip’s shape, a wide thin rectangle, is different from the shape actually used by the app, a small circle. This makes it hard to judge what areas you’ll actually be erasing.

As a stylus, Pencil is better than most of the others I’ve tried, but it is not the best. That accolade still belongs to the Maglus by Applydea.

Pencil’s tip collapses easily and requires too much force to trigger a touch recognition. This is a common problem with every stylus I’ve used except the Maglus. The black material at Pencil’s tip may be resilient, but it feels fragile. It buckles under the tip of my finger. By comparison, the Maglus’ tip is sturdy, and feels paradoxically stiffer as I apply more and more force. The tip retains more of its resting shape under pressure than the tips of other styluses, making the Maglus the most accurate stylus I’ve used.

Like the Maglus, Pencil is shaped like a carpenter’s pencil, though Pencil’s shape is much closer to the real thing. Pencil’s body feels smooth and light — too light, I think. I ordered the walnut version. It’s definitely machined from real wood, but hollowed out until the walls of the stylus are thin. A matte finish was applied thinly over the fine grain, leaving behind a satisfying texture. The part line where the black tip meets the wood exterior would benefit from higher manufacturing tolerances. This part line is where the electronics separate from the body when you need to recharge the battery. There’s a distracting contrast there, unfortunately placed right where your fingers spend the most time. I feel anxious that I might break what feels like a fragile seal.

In contrast, the Maglus is a tank, constructed from a solid piece of aluminum. It’s pleasantly heavy and practically indestructible. Both Pencil and the Maglus have magnets embedded in their bodies to make it easy to stow them on your iPad’s Smart Cover or on the side of a filing cabinet. Pencil’s magnet is much weaker than the Maglus’ magnet, and placed near the eraser end, making it harder to attach it to your iPad with confidence. The Maglus’ magnet is in the middle, right under the black rubber skids, and is so strong that I don’t think I could ever accidentally brush it off.

If you love the Paper app as much as I do, you’ll find that Pencil is an indispensable companion when using that app. While it isn’t the most comfortable or accurate stylus you can find, the features it unlocks in the app are enough to overcome its weaknesses. On the other hand, if you are looking for a general purpose stylus, the Maglus still can’t be beat. The Bamboo stylus, pictured above, is the best alternative for folks looking for something that feels more like a pen than a carpenter’s pencil.